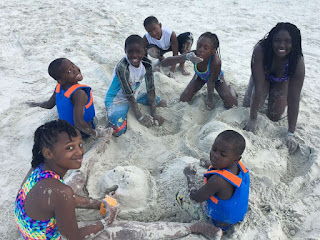 Florida couple DaShoan and Sofia Olds always knew they wanted to adopt kids, but they didn't think they would adopt seven at once.

The Olds first heard the story of seven siblings who were separated into four different foster homes on TV on Thanksgiving Day.

Once Sofia saw a photo of the kids, she knew they were "the children she was meant to mother."

"It's just something you had to do," DaShoan Olds told ABC News. "My wife and I were blessed with a house that was too big for us. That would be so selfish of us to have the space [and] for us not to offer our home to them. I always felt that when you are blessed, you'll be a blessing."

On June 2, the Olds brought the seven siblings, four boys and three girls, to their home. Necia, 12, Eric, 10, Erica, 10, Zavian, 9, Dava, 8, Keyon, 5, and Reggie, 4, were reunited after spending two years in different foster homes. The Olds expect the adoption to become official in September. To read more and watch the video to this story Click Here.
Labels: Featured Stories