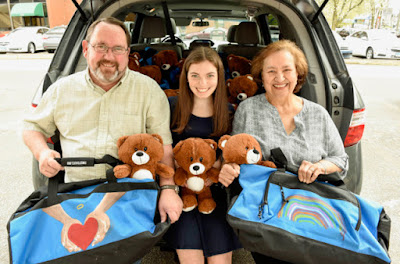 19-year-old former foster child and 2016 Ridgefield High School graduate wants to help those going through what she’s experienced over the years.

That’s why Grace Burns did a fund-raiser for Together We Rise, a national organization focused on helping children in the foster care system.

“I used to be a foster kid and I really wanted to contribute back,” she told The Press.
All the money Grace raised — over $1,000 — went toward buying suitcases for children in foster care, so they could put their belongings there — instead of the black trash bag they’re usually given when it’s time to move.

Grace’s mom, Kristen Burns, has made fostering one of her life’s missions and maintains relationships with her foster children even after some of them are reunited with their families.
“She [Grace] knew that some kids are taken out of their parents’ homes suddenly and they throw all their stuff in a black garbage bag,” said Kristen.

“That’s the most common way that kids have to transport their stuff from home to home; sometimes they go to shelters first or group homes and it’s not very dignified — many kids who were foster kids complained about that feeling of just having a black trash bag,” she said. To read more on this story By Ivanha Paz Click Here.
Labels: Featured Stories