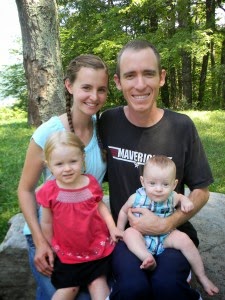 If David Ahlgren hadn’t actually lived through it, you might suspect his life was the script for a movie. Raised on the island of Guam along with seven siblings, David was put into foster care at the age of 13 after his mother’s death. Among the dozens of placements he endured was over a year in a juvenile jail cell – not because he had committed any crime but because there were no other foster placements available. After he wrote letters to numerous U.S. government officials, he was abruptly sent to a foster home in Oklahoma. What did he know about Oklahoma? Only the few things he had learned from googling it online. And yet today at 30 he, his wife and two small children are growing a variety of organic, sustainable crops on 120 acres of land in rural Oklahoma. The boy from a tiny island has become a success story in Oklahoma. How did that happen?

Foster Care 2 Success played a large role, says David. Four years of scholarship money helped him get through the University of Central Oklahoma where he majored in Business Administration. “Thanks to the scholarship, I was able to not have a job other than getting through college,” he says. David was also one of the first two students to be brought to Washington by FC2S for a summer internship; in his case, in the office of Senator Mary Landrieu. “It opened my eyes to issues surrounding foster care,” he says. “You see the problem but you don’t see the many people who care about improving the system. It was like a coin flipped over. I saw that there are so many people standing firm fighting for my brothers and sisters in foster care.”